Because CBD oil supports the immune system’s ability to modulate activity, it allows the body to better control cellular degeneration. This helps prevent:

This support also helps the cells fight off free radicals, helping to prevent the development of cancerous cells.

Studies also show it helps with:

I hope to expand on these themes as I get chance over the course of 2020
More reading:

Does it work - Dosages and more DVM 360 Discussion

Ellevet Sciences - One of the ranges on my site

Q & A from Ellevance Sciences - You Tube Channel Dosages uses and a lot more
Cannabis and endocannabinoid modulators: Therapeutic promises and challenges
https://www.ncbi.nlm.nih.gov/pmc/articles/PMC2544377/

Hemp is an incredibly versatile plant not only a medicinal herb but also the fibre from the stalks is used to make clothes, paper and rope among many other products, the seeds are used for food, and for thousands of years people have used the plant for its health benefits. Hemp went out of favour in the last century and only in the past few years have we rediscovered the amazing pharmacopoeia of beneficial compounds the plant naturally offers us – of which CBD is one of the best known.
Learn more about the pharmacology of Hemp's constituents both cannabinoids, flavonoids and terpenes which act together in a synergist fashion known by herbalists as the 'entourage' affect, synergy the whole plant affect.

Some more answers to your Questions about Hemp Oils
Shop Here

What is CBD/CBA?
CBD or cannabidiol is one of the many phyto (plant) chemicals called cannabinoids found in the Cannabis salvia plant. It is perhaps the best known but there are many other compounds such as THC the psychoactive compound i.e. the part that makes you high. Hemp is a strain of the Cannabis plant which is bred so as NOT to contain TCH
CBD (cannabidiol) is the most abundant cannabinoid present in the hemp plant. There are over 80+ naturally ocuring cannabinoids found in cannabis, other cannabinoids such as CBG, CBV, CBC are generally present in trace amount.
CBDA is cannabidonic acid
Both CBD and CBDA unique compounds naturally present in hemp.

If we juice raw hemp, we find a large amount of CBDA alongside CBD.It has been observed and believe that a healthy proportion of CBDA in our oils improves the overall spectrum of health promoting photo-nutrients. Recent studies in the US seem to back these observations up that products without CBDA do not work as well

CBDA is the acidic precursor to CBD. When hemp / cannabis grows, its produces THCA and CBDA, not THC and CBD. These cannabinoids in their acidic form are often seen as being ‘inactive’. When cannabis is heated, such as through smoking, cooking, or vaporisation, a process known as decarboxylation occurs. Decarboxylation turns both THCA and CBDA into THC and CBD respectively. Both CBDA and CBD are non-psychoactive, meaning they won’t get you high.

and What is TCH?
THC - Delta-9 Tetrahydrocannabinol.
This is the main psychoactive phytocannabinoid found in cannabis
It is only found in very trace amounts in Hemp (<0.2%) but in high amounts in chunk for example. Strangely in the dog it is a very safe drug and experimentally they have been given 3000mg per kg with no fatalities.
Which Products are Best?
There are various factors to consider in selecting a product:

1. CBD is not hat well absorbed from the GI tract
2. It is better absorbed in or with a fatty meal
3. It can be absorbed through the mucous membranes of the mouth.

These reasons I recommend the liquid oils for pets squirted under the tongue. However there certainly are observable affects when given in food.
There are studies which show that CBDA is important clinically and with the entourage affect we know the other compounds found in hemp such as terpenes are also beneficial so make sure you use a "Full spectrum" product
What Dosage should I use?
Some studies have shown what is known as a Biphasic Dosage Curve for cannabinoids which is unusual in pharmacy.
In other words giving more does not alway work better. Effect increase up to a certain point or sweet spot and then decreases where as most drugs plateau out.
So follow the recommendations given for each product yes perhaps starting a little low and building up as we would with most herbs but if you find increasing the dose further not causing improvement then cut back a bit. They are very safe non-addictive compounds and natural so vary a little and one dose may suit one individual and not another. 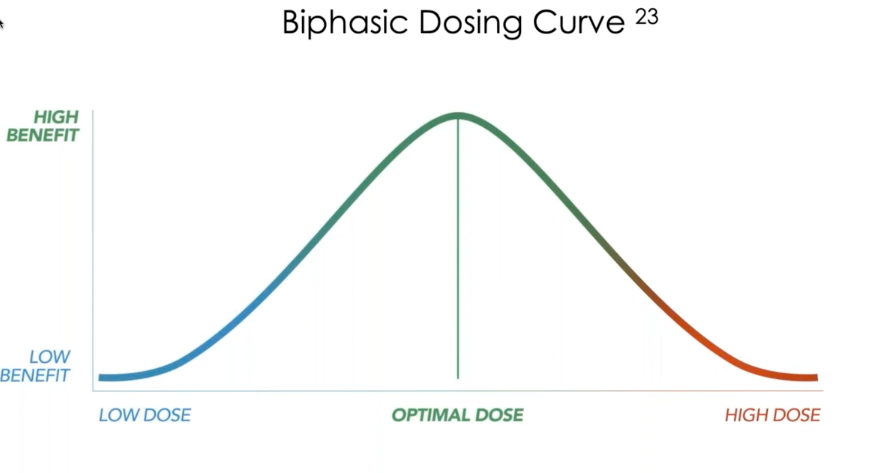 The Endo-Cannabinoid System
The body’s endocannabinoid system (ECS) is an important physiological system involved in establishing and maintaining our health.

The ECS plays a key role in regulating our physiological and cognitive processes and it’s purpose is to achieve homeostasis or ‘inner balance'.

Every mammal, not just humans, but animals including dogs, cats, horses, have an endocannabinoid system.  Humans produce their own cannabinoids, so called endocannabinoids from before we are born throughout our lives.  The best known human produced cannabinoids are 2AG and Anandamide (named after the Sanskrit term “Ananda,” which translates to “peace”). Anandamide is also called the 'bliss molecule'. It is becoming apparent that having healthy Anandamide levels is beneficial for our inner harmony and feeling of happiness.

The endocannabinoid system is part of the central nervous system. It is a network of receptors spread throughout our entire body. It was only really in the 1970s it was discovered

The ECS has been recognised as an important body system affecting function of the brain, endocrine, and immune tissues. It also appears to play a very important regulatory role in the secretion of hormones related to reproductive functions and response to stress, affects appetite, food intake, energy balance and gastrointestinal tract activity. More conclusive evidence is coming to light supporting the theory of clinical endocannabinoid deficiency (Dr Ethan Russo), particularly for disease such as migraine, fibromyalgia, and irritable bowel syndrome. Given the large number of diseases which have shown endocannabinoid abnormalities such as epilepsy, cancer and a wide array of neurodegenerative diseases: it is an area which will undoubtedly and hopefully be explored further by the scientific community.

Interestingly we are not aware of any other plant that has a whole physiological system dedicated to it in all mammals.  The cannabis plant may be unique in this respect as we cannot get cannabinoids to support our ECS from any other natural food source in significant amounts.
In simple terms CDB reduces the action of CB1 and CB2 receptors were as TCH increases the affect.
EC Receptors
There are cannabinoid receptors throughout the body but based in the nervous system which respond to endocannabinoids the body produces and also to certain exogenous cannabinoids such as TCH and CBD.
A variety of different types have been described but I am just going to mention two CB1 and CB2
CB1 is the most abundant protein based receptor found in mammalian brains and Central nervous system (CNS) It controls several neutrotranmitters in the CNS such as Dopamine. It affects Mood, inflammation and pain and is responsible for the psychoactive affects of THC because THC will bind to these receptors.
These receptor are found in the GI Tract, liver, fat cells and many other locations.
CB2 receptors are primarily found in the immune cells eg T cells.
They have anti-inflammatory and moderate the immune system

Terpenes and Other Molecules in Hemp
Cannabis and Hemp also contain other phyto-chemicals, the 2 main ones are
Terpenes e.g. Limonene, Beta-Carophyllene and pinene.
These are the essential oils of plants to protect or attract plants
Flavenoids - plant based anti-oxidants

These compounds also have a physiological affect in the human or animal body. Studies in humans and to some extent dogs have shown that single extracts of just one molecule e.g. Marinol artificial CBD is not as affect as whole plant extracts. This is the Entourage affect.
What conditions can it be used for?
Cannabis and Hemp also contain other phyto-chemicals the 2 main ones are
Terpenes e.g. Limonene, Beta-Carophyllene and pinene.
These are the essential oils of plants to protect or attract plants
Flavenoids - plant based anti-oxidants

These compounds also have a physiological affect in the human or animal body. Studies in humans and to some extent dogs have shown that single extracts of just one molecule e.g. Marinol artificial CBD is not as affect as whole plant extracts. This is the Entourage affect.